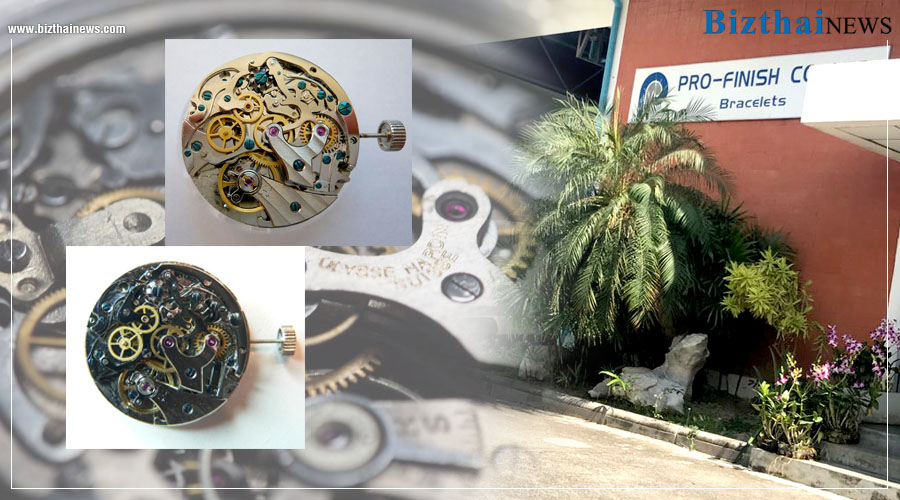 Reaching the 20th anniversary of running business, Pro-Finish insists on investing extension from auxiliaries, privileges, skillful labors, and convenient exportation. According to Ministry of Commerce, it was reported that the directions of watch markets and other components are increasingly expanding. As an overview, the domestic watch markets values more than 25,000 million baht, and they tends to grow well this year.

Pro-Finish Co., Ltd., the metal watchband and exporting parts manufacturer reported that the company has run its business in Thailand for 20 years which was established on 13th March, 2000, enrolled with the fund of 100 million baht. Plus, the firm was promoted from BOI which contributed to plenty of privileges including corporate income tax, import duties on materials from foreign countries, and import duties on machinery. Consistently, these has made benefits for the business, and the firm decided to continuously extend the investments: line production extension, modern technological machinery installation for production efficiency that is capable with the market demand.

On the production, the firm imports standard materials from overseas and assemble into any product. Afterwards, the products are shipped to Switzerland in order to produce watches for global exportation.

The products from the manufacturer are made by the high technology machines as well as the system and methods according to the universal standard. All process is maintained by the staff and expert technicians in order to guarantee that the products are qualified and approved from the overseas watch maker.

For the purpose that Thailand is an essential manufacturing base in ASEAN since it has good preparation in terms of working skills and medium cost. Furthermore, Thailand is located in a suitably strategic point for the transportation by aircraft with a large airport as well as by sea with a large harbor for supporting importing and exporting. In terms of infrastructure and public utilities together with the privileges, they attract many investors to do investment in the country annually.

For the labor section, it has been 20 years that the firm run the business based on ethical behavior, social responsibility, and conforming to the universal standard, so that the firm is able to stand on the stage of world trading. Therefore, the firm aims to encourage and improve the skills in the labors on knowledge, capability, and good life quality which will cause increasing the ability in the competition and decreasing the terms of trading in case of labor as well.

In terms of the labor practice, the firm operates with the models as follows: 1) the firm will not involve in nor support any labor resulting from unwillingness, 2) manage the environments for the workers in case of their hygiene and safety, 3) respect the rights of the workers in the organization by following the law, 4) Any discriminating action is not permitted including the factors of nationalities, origins, religions, languages, ages, genders, marriage status, personal attitudes on gender, and disability, 5) the firm will not involve in nor support any physical punishment, physical and mental intimidation, or violent words, 6) follow the regulations according to the law and industrial standard on working hours, break of the week, and overtime not longer than 36 hours per week, 7) do the payments according to the law regarding a medium wage and respond to the basic demand of the workers more adequately, 8) the firm will not involve in nor support any action that avoid the rights of the workers under the regulation regarding labor and social security, and 9) be determined to perform under the regulations declared by this standard including the national law or any related law, other regulations declared by the company, and respect to the universal provision.

Ministry of Commerce has reported the Thailand international trade situation of May, 2019: the exportation in Thailand reduced by 2.6% which costs 18.6 billion US dollars, primarily resulting from the pressure from the external factors. Plus, world trade and demand of the trading partners slowed down by the cycle of trade, together with temporary factors which consist of the specific features of each region such as the US Protectionist Trade Policies, political situation in Europe, and credit market in China.

Nevertheless, Thai exportation maintains their trading competition and expand in a variety of markets such as USA, India, Vietnam, Cambodia, Malaysia, Hong Kong, Russia and CIS, and Canada. Particularly, food and agriculture goods continue expanding such as fresh and frozen vegetables and fruits, canned products, fresh and frozen chicken, drinks, and canned tuna. These products has been widespread to such various markets including those in China, ASEAN, USA, Taiwan and Hong Kong. On the other hand, industrial goods which are interesting such as air-conditioners, parts for radio receivers, televisions, parts for motorcycles, and parts for watches. Furthermore, there are parts which have been continuously expanding for several years including the first four months in 2019: the rate of exportation reduced by 1.9%.

“Overall, even though the exchange rate of Thai baht goes up, the watch market tends to grow well. However, the firm has the strategy to organize the promotion which make the customers ignore the exchange rate difference. Also, the firm is able to initially import the special products and sell them in the country. Moreover, due to the strengthened currency of Thai baht, Thai citizen can hold more money. This can be considered that purchasing power has been recovered in the second half of the year since things are becoming stable along with the new government. During one and two months, the circulation in the retail shops was rising up. This means some of customers start to spend their money, yet the cabinet issues do not seem to affect the economic overview nor the barrier since it does not cause as much.”